Matt Carney is a PhD student in the Biomechatronics Group at the MIT Media Lab where he is designing and building next generation bionic limbs.
His specialty in mechanical design engineering was born from years of experience working at the industry leading firms Meka Robotics (humanoids) and IDEO (product design). In this interview, Matt discusses his desire to end disability, alongside the ethics of integrating personality in to robotics (and technology in general), and what should and shouldn’t be achieved going forward in the industry. 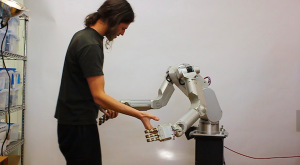 Can you introduce yourself?

My name is Matt Carney, and I am a PhD Candidate in the Media Lab at MIT, and I am trained as a Mechanical Engineer, and I have a Bachelor’s and Master’s Degree in Mechanical Engineering from California, where I am originally from. I am currently a Fifth Year student here now, and I am a Mechatronics Design Engineer, or you might even say Biomechatronics Design Engineer. I am in the Biomechatronics Research Group, and what that means is that my research is focussed around building robotic-powered prosthetic legs for amputees. My core research now is to build a robotic knee and ankle system for above knee, and below knee amputations.

What is your overall aim and goal?

At the most fundamental level we are trying to eliminate disability. We want to develop technologies that allow there to be no difference between disabled people, and someone of a normative body type, perhaps there will be a point where we can even augment, to go beyond normative capabilities. What that means is developing technologies that allow us to build systems that perform as good, or better than the human body, as well as finding ways to improve the way that these robotics systems communicate with the human body, so that it will perform the way that you want it to. That’s a major disconnect right now If you wear a robotic limb of some sort, or at least for robotic legs, it’s a person living in a symbiotic relationship with an autonomous robot. That robot is constantly trying to figure out what to do based on the input and the state that it’s measuring from it’s environment – so, the angle, torque and velocity that it’s moving by. Of course, the human in question is trying to figure out what it should be doing as well, and how to work with the device. So, what we want to figure out now, is how to streamline that process. I actually have some interest to go beyond that and allow some personality for the user. I want to allow people to have some sort of tuning so that you can put some personality back into the device.

Right now, if we were going to give someone a new robotic leg, we would have to find someone that is a height, and weight match to you, and measure their gate profile, and collect their other walking data by putting them on a treadmill or something, feed that into our controller and tune the controller to match that. Then, we are going to put that robot with that controller, with that person’s gate on you. Every person has their own personality in their gate. You can identify someone just by their walking. That’s a paradigm which is an interesting place that I want to go with my own research, which is how do I apply that personalisation of the individual to their gate profile?

Have you always had that passion for robotics?

I have wanted to build humanoid robots since I was at least seven years old. When I was 29, my mom pulled out a card from when I was in Second Grade, and it said, ‘What do you want to do when you grow up?’ And the reply was, that I wanted to build humanoid robots, or work with personal computers. At that time, when I was that age, I had just worked on my first humanoid robot, so I had satisfied my lifetime goal up to that point. I think I came by it naturally because my father is a Scrap Metal Dealer, and my mother is an Occupational Therapist. Biomechatronics is this giant melding of giant industrial scale manufacturing processes, and rehabilitation from disability, and that’s led to my career.

What are your ethics regarding the melding of robotics and the human body?

Just because you can do something doesn’t mean that you should. I think that’s a big issue that a lot of scientists don’t always reflect on, and I think that it’s really important to reflect on that! In fact, I am very happy to have found this niche of biomechatronics, because when I was building humanoids, it felt self-indulgent to be brutally honest. I feel like a lot of robotics is developing systems because we can, not because we should. With the biomechatronics, it’s a great application because we are satisfying that interest and that need to build these systems, but it’s definitely for a good purpose, to end disability.

I think we really need to question whether we need all these apps on our phones that are taking our attentions away from actual interpersonal relationships? Is there a reason for us to build all of these humanoid robots? We always talk about robots taking over the world, but it’s not just the robot in its physical form, it’s the software that’s behind it, and the ability we are giving it to make decisions. We are giving up our decision making ability right now, and giving up our autonomy to these machine-learning algorithms, and that’s something we should think about, do we want to do that? What is the point of doing that? I go to the supermarket, and I see these automated payment stands now, and we’re getting rid of the cashiers. You have to ask, just because we can automate that, does it mean that we really need to? That’s a paying job that somebody else could do. At the same time, for some people that might be the only interaction that they have with another human being in a day – talking to the cashier for just a moment. To give that up is going to further isolate people, so I think that it’s very important to question, what the point is for these developments, and if they are really a good idea?

What key tips and advice would you give to anybody that wants to get into your industry and get to your level?

To me, as a Mechanical Engineer, I take a part every single thing that I can get my hands on. I strongly believe in learning from others. I’m always thinking about who I’m going to be surrounded by, are they going to be good people? Am I going to be able to learn from them? You are always going to need to stand on the shoulders of others. Temperament is about not giving up. I just plough ahead. If I don’t try something and I just get scared then I am never going to get through that hurdle.

What is your process when you are building a robot?

I strongly believe that inspiration comes from unexpected places. Just being in a rut doing the same thing all the time is not good for inspiration! When I first started out with this design that I am working on, I spent a bunch of time going round museums, and practicing sketching. I would sketch things like pottery, or ancient Native American sculptures, and I’d look for design inspiration in those artefacts. Inspiration can just come from random places. I also think that it’s really important to just talk with random people because you never know who is going to inspire you.

I draw everything on pen and paper before getting into the computer. When it gets down to the nuts and bolts, I run a number on every single component I design. I start with the first order of approximation, with force analysis and free body diagrams – all the basic math and engineering. Then, I start to see how I can fit all of these different components together! I do all of this with my headphones on, and I’ll put my hood and my blinders on as well, and I will listen to thrash metal, and brutal death metal all day every day! I have about six bands that I have been listening to every single day for at least a decade now. Every robot that I have ever designed has been designed to bands like Fragments Of Unbecoming!

Listen to the full interview here: