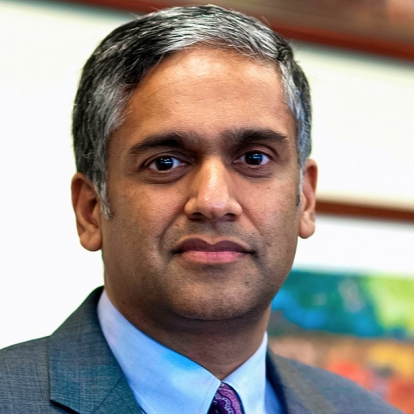 Anantha P. Chandrakasan is the dean of the MIT School of Engineering and the Vannevar Bush Professor of Electrical Engineering and Computer Science. He is devoted to sustaining and enhancing the school’s position of leadership in the world with policies and practices that accelerate scientific discovery and the application of knowledge for the betterment of humankind.

Born in Chennai, India, Chandrakasan moved to the United States while in high school. His mother was a biochemist and Fulbright scholar. Spending time in her labs inspired his love of research and open-ended problem-solving. He earned his bachelor’s (1989), master’s (1990), and doctoral (1994) degrees in electrical engineering and computer sciences from the University of California, Berkeley. After joining the MIT faculty, he was the director of the Microsystems Technology Laboratories (MTL) from 2006 until he became the head the Department of Electrical Engineering and Computer Science (EECS) in 2011, a position that concluded with his appointment as dean in July 2017.

Chandrakasan is passionate about facilitating exciting opportunities. During his six-year tenure as head of MIT’s largest academic department, he spearheaded a number of initiatives that enabled students, postdocs, and faculty to conduct research, explore entrepreneurial projects, and engage with EECS. For students, one of these included the Advanced Undergraduate Research Opportunities Program, known as “SuperUROP,” a year-long independent research program that provides tools for students to do publication-quality research. It was launched in EECS in 2012 and expanded to the whole School of Engineering in 2015.

In addition, Chandrakasan is committed to advancing diversity and the enhancement of the student experience. While at the helm of EECS, he created the Rising Stars program, an annual event that convenes graduate and postdoc women for the purpose of sharing advice about the early stages of an academic career. He initiated Postdoc6, which aims to foster a sense of community for postdocs and help them develop skills that will serve their careers. And he created Start6, which expanded to StartMIT, an independent activities period (IAP) class, provides students and postdocs the opportunity to learn from and interact with industrial innovation leaders.

To advance the frontiers of STEM education, Chandrakasan is exploring how to best use different kinds of novel teaching methods. In 2014, EECS developed one of the first certificate-granting courses for MITx, the Institute’s massive open online course (MOOC) effort, in support of XSeries, which provides integrated offerings that help reimagine the building blocks that structure learning in the digital environment. Last fall, EECS and the Office of Digital Learning piloted a full-credit online course for a small cohort of students on campus, who gave the experience strong marks for providing flexibility and reducing stress.

Like MIT as a whole, Chandrakasan is committed to supporting the conversion of discoveries and inventions into practical technologies, products, and services in the world. As such, he has a long-standing interest in creating opportunities for innovation outside the lab. He is a board member and chair of the MIT advisory committee dealing with MIT policies for The Engine, a new accelerator launched by MIT to support startup companies working on scientific and technological innovation with the potential for transformative societal impact.

Apart from his administrative roles, Chandrakasan has produced a significant body of research since joining the MIT faculty in 1994. It has focused largely on making electronic circuits more energy efficient. His early work on low-power chips for portable computers helped make possible the development of today’s smartphones and other mobile devices. More recently, his research has addressed the challenge of powering even more energy-constrained technologies, such as the “internet of things” that would allow many everyday devices to send and receive data via networked servers while being powered from a tiny energy source.

From 2010–2018, he served as Conference Chair of the IEEE International Solid-State Circuits Conference (ISSCC), the foremost global forum for the presentation of advances in solid-state circuits and systems-on-a-chip. He is a recipient of awards including the 2009 Semiconductor Industry Association (SIA) University Researcher Award, the 2013 IEEE Donald O. Pederson Award in Solid-State Circuits, an honorary doctorate from KU Leuven in 2016, and the UC Berkeley EE Distinguished Alumni Award in 2017. He was also recognized as the author with the highest number of publications in the 60-year history of the IEEE ISSCC. A fellow of IEEE, in 2015 he was elected to the National Academy of Engineering, and in 2019 he was elected to the American Academy of Arts & Sciences.

Chandrakasan also leads the MIT Energy-Efficient Circuits and Systems Group, whose research projects have addressed security hardware, energy harvesting, and wireless charging for the internet of things; energy-efficient circuits and systems for multimedia processing; and platforms for ultra-low-power biomedical electronics.

As dean, Chandrakasan aims to build a culture that emphasizes meritocratic openness to talent and ideas from all over the world, vibrant intellectual exchange, and interdisciplinary collaborations around complex societal problems, such as energy, water, food, transportation, security, health, environmental quality, and economic development. His leadership style emphasizes listening to and integrating the views of faculty and students into a shared vision.

Chandrakasan will rely on these established values as he guides a school that educates almost three-quarters of MIT’s undergraduates and half of the graduate students across eight departments, two campus-wide institutes, and dozens of laboratories and research centers that operate under the broad umbrella of the school or within individual departments. Affiliated academic programs include MIT Professional Education, the Harvard-MIT Health Sciences and Technology program, among others. Just over a third of MIT’s faculty members are in the school and they account for more than half of the sponsored research at the Institute.

Chandrakasan lives in Belmont, Massachusetts, with his wife and three children, the oldest of whom graduated from MIT in 2017.